Workers surround the signature glass spheres under construction at the Amazon corporate headquarters on June 16, 2017 in Seattle. In September, Amazon announced its plan to open a second headquarters. Over 200 cities have submitted proposals to be the home of “HQ2.” Photo by David Ryder/Getty Images

Seattle is one of the fastest growing large cities in America, adding on average 15,658 people per year since 2010, according to U.S. Census data compiled by the Seattle Times.

“We’re blessed to have a thriving economy in Seattle. We are attracting the best companies in the world to locate here to hire people,” said Seattle Mayor Tim Burgess. But the downside, he said, is such growth has “created an affordability crisis [whereby] many people can’t afford to live in the city any longer.” 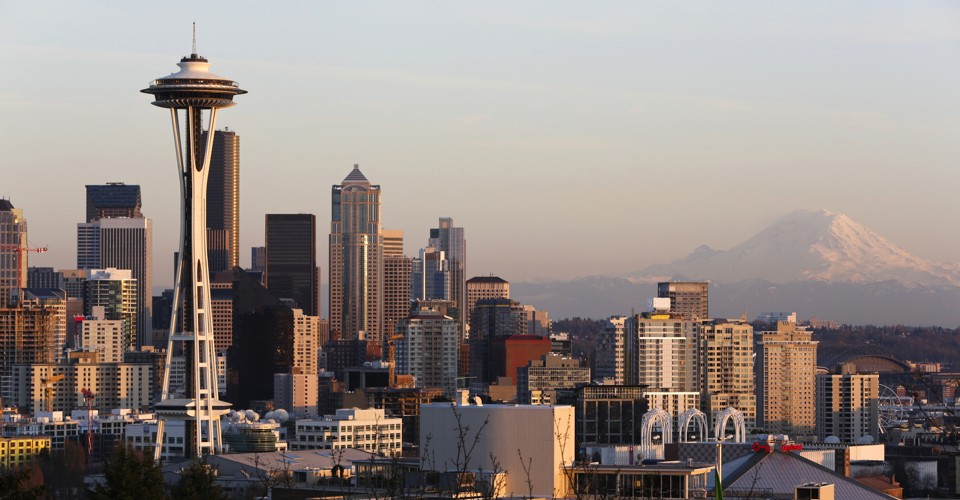 Can Seattle Handle Its Own Growth?

Burgess joined The Atlantic Senior Editor Ron Brownstein Tuesday for a discussion on the city’s growth and residents’ anxieties about the challenges that come with it. The event, held at the Impact Hub in Seattle’s historic Pioneer Square neighborhood, was part of The Atlantic’s Renewal Series, presented by AtlanticLive and underwritten by Allstate. (The Renewal Project is made possible by Allstate.)

Brownstein pointed to the recent Atlantic Media/Allstate Regional Renewal poll that shows residents feel the region is moving in a positive direction. One reason for this is an increase in employment opportunities: in the last decade, Seattle has added nearly 220,000 private sector jobs. This is thanks in part to a thriving tech industry, anchored by the likes of Microsoft and Amazon. In September the online retailer announced plans to build a second North American headquarters. Over 200 cities have submitted proposals to be Amazon’s “HQ2,” which will bring with it 50,000 high-paying jobs.

So what can one of these lucky cities learn from Seattle’s success—and failures?
“I would say to these other cities, it’s great if you win Amazon’s second headquarters, but make sure you’re prepared to address the downsides of that,” Burgess said. “And the downsides of that are going to affect people who are traditionally marginalized … people living in poverty, people of color, immigrants, and refugees.”

That means addressing affordable housing. The mayor pointed to the city’s Mandatory Housing Affordability plan, which requires that new commercial and multifamily residential development include affordable homes. (Alternatively, developers can contribute to a city fund for affordable housing.) The plan is currently in effect in six Seattle neighborhoods, and the city is proposing to implement it citywide.

“I wish we had done that sooner in Seattle, but no one guessed Amazon would explode that fast,” Burgess admitted.

.@SeattleMayorTim : to cities wanting Amazon HQ2: "Make sure you're prepared to deal with the downsides. People already sidelined will be even moreso. We couldn't guess @amazon would blow up the way it did." #renewalseries @KIRO7Seattle pic.twitter.com/ZgRL9V9GLo

Brownstein also invited local leaders and experts to weigh in what’s being done—and what still needs to be done—to make Seattle equitable for all its residents. Svenja Gudell, chief economist at Zillow; Maud Daudon, president and CEO of the Seattle Metropolitan Chamber of Commerce; and Trish Millines Dziko co-founder and executive director of Technology Access Foundation added to the conversation. You can watch the full discussion on AtlanticLive’s Facebook page.

Margaret Myers is the editor of The Renewal Project.

She drove 43,000 miles and through all 50 states to uncover stories of kindness

Nominations are now closed for the 2020 Renewal Awards

This app connects those in need with the nearest food pantry

Training the folks on the front lines of nightlife safety—bartenders

Causeartist releases its 2020 Social Entrepreneurs to Watch For list